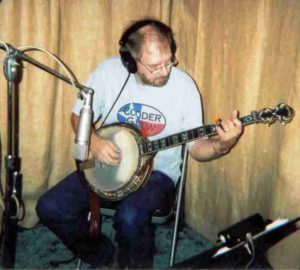 I am getting a lot of questions about the story and the set-up of Bobby Thompson’s studio banjo, also referred to as the “Hee-Haw Banjo”, and would like to give an in-depth description of the perhaps most often recorded banjo ever. Bobby gave me the banjo in 1996 because he could no longer play it anymore due to his illness. I’ve always loved Bobby Thompson’s banjo sound ever since I started to play the banjo in 1968. The sound of his banjo and his great musicality to me represented Nashville more than anything else. But as unique as his banjo sounds on the countless recordings (so far my collection of albums featuring Bobby Thompson’s excellent banjo work contains about 400 records or more) as unique are the features of this historical instrument. 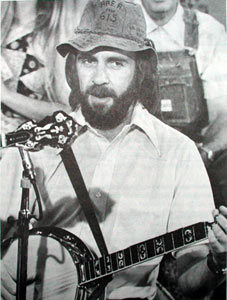 Alone the model name of the banjo is controversial. Bobby always spoke of his Baldwin Style E Prototype but it actually looks like a Style D except for the tailpiece and the armrest which are not engraved. Banjo aficionado Ed Britt and I inspected the banjo thoroughly and we came to the conclusion that it’s definitely a transition model from the time when ODE was taken over by Baldwin in the late 1960s. In fact it doesn’t even have a serial number.

It has all the specs of a pre-Baldwin/ODE banjo but already with the Baldwin banner in the headstock. The neck is wider and cut slightly different than on the later Baldwin/ODEs, the heel is tapered, and the truss rod adjustment is accessible from the back of the heel as opposed to via the hole in the heel plate on later models. The inlays are a little bit different, too, and it’s got that “propeller inlay” at the 22nd fret as a special feature of the older ODE necks. The metal of the flange is significantly thinner, and it has only one coordinator rod just like the old ODEs. During the transition period they obviously changed the model name, too which later led to some confusion. Anyway, all those little differences resulting from the particular way the early ODEs were milled are minor to the modifications Bobby did himself to achieve the best sound and playability for him. Bobby as a studio musician was very sensitive in terms of how his banjo should sound and how the neck should feel. He modified virtually every single part of his studio banjo and set it up so it would almost play by itself. 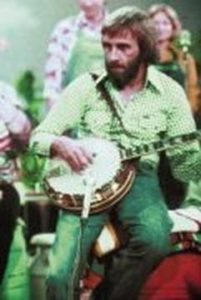 Bobby picked up the banjo at the Sho-Bud store on Nashville’s Broadway in the beginning of 1967, so the banjo was most likely built sometime in the fall of 1966. According to a good friend Don Lineburger, Bobby started working on the banjo immediately after he received it and probably kept making further improvements down through the years. Of course, most of the small alterations were invisible for the viewer when Bobby played on Hee-Haw. The instrument today is still in the same condition that it was in when I got it. 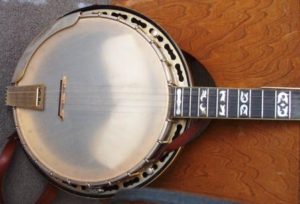 The most drastic and evident change of the banjo without doubt was the use of the famous kitchen towel. The main reason for this was to prevent sound leakage in the studio and to kill the overtones, but as a side effect along with the fiberskyn head it would create some kind of a nice percussive “vellum paper sound”. Bobby placed the towel right between coordinator rod and head near the y-position of the banjo and attached it with duct tape. Drummer Larry Londin talked Bobby into using a fiberskyn head on the banjo. His wife used to own a drum store in Nashville called Dog Percussion and Larry got him a fiberskyn1 head in the early 80s. The early fiberskyn heads were a little thinner than the current ones and slightly translucent, kinda like the Renaissance heads now. If you listen to the records of that time period you can hear that Bobby’s banjo sounds a little sweeter than before in the 70s when he used a Remo head.

Bobby experimented a lot with different banjo heads and always kept them real tight. He filed down the inner edge of the tension hoop to avoid tearing of the head like advised in the Earl Scruggs instruction book and also filed down the 2″ wide indentation at the front of the tension hoop to be able to use medium or low collar heads. He moved the armrest over one bracket so that it got centered right beneath his arm position. Bobby used Vega or Black Diamond light gauge strings and a standard 5/8″ bridge. It seems that some of the maple was taken off or carved out from underneath, the edges of the ebony were rounded a little bit. The tailpiece is set pretty high with the tip about 7/16″ above the head. To get the string action above the 12th fret down to 3/32″ he wedged a small strip of tin metal as a shimmy between heel and rim. Earl Scruggs suggested that in his book and it seems that back in those days it was about the only reference for banjo set-up. 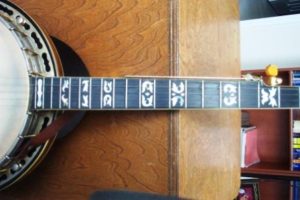 Bobby told me that he had the frets replaced only once, later all the frets were trimmed down for easier playability. The banjo had a neck reset, and a major repair job was done to the heel at one time. It looks like the lag bolt was broke and had to be drilled out. Those bolts were made of poor quality metal and would easily break with over-tightening the coordinator rod. A new bolt was inserted through the front of the heel and the hole was later covered with a rectangular piece of birch. During that procedure the heel plate was taken off and put back on. The upper lag bolt had also been replaced and was tightened with a propeller nut which makes it easy to quickly adjust the action in the recording studio. The oblong-size washer underneath the nut was probably taken from an old Kay banjo. 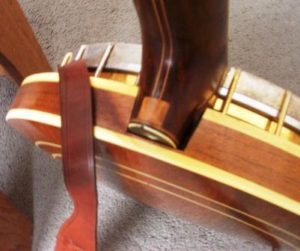 Almost all the finish on the neck has come off which makes the neck pretty fast. 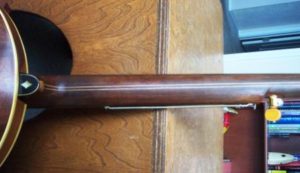 Speed was a main issue at the studio sessions. You had to be able to change keys very fast or modulate during a song and that’s why Bobby used sliding capos which could be moved in no time, actually even while he kept playing.

The way he modulated from e. g. a G to a Ab was very spectacular. You play a reverse roll over an open G, then half a reverse roll holding down a D7th with middle and ring finger, grab the capo with thumb and index at the same time and while you’re sliding up middle and ring to an Eb7th pull the capo up with you, play the other half of the reverse roll and release and you’re in Ab.

As a main capo Bobby used a Russell capo and as a 5th string capo he had a Vega-Pittman sliding capo attached to the side of the neck. Since the capo covered up the position dots now he had drilled little spots into the bar of the capo and highlighted them up with a black marker. He took out the 5th string nut and replaced it with a little piece of fret wire so that the spring of the capo would slide smoothly over it. The main nut was sanded down for the same reason so the main capo could slide over it without effort. 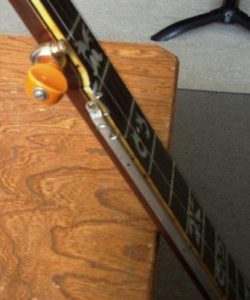 The friction peg early on was replaced by a Kroll geared 5th string peg. Bobby had broken the original button, couldn’t find one just like it and replaced it with one made of porcelain. Down through the years it turned into a dark yellow color. He also lost one of the screws of the 5th string capo and for a long time it was held in place with duct tape until he found a small enough screw that would fit. The screw in the 5th peg is not original either, it’s a little too long and the washer keeps rattling at certain frequencies.

The banjo came with an old Barcus-Berry pickup including the original pre-amp and cables. The transducer cable is fed through a little hole drilled in the bottom side of the rim between tone ring and flange. The jack is custom mounted onto a tension hook with a little piece of aluminum. Bobby must have experienced with various pickup concepts. Several of the flange holes at the bottom are filed larger to fit a pickup jack. Bobby also took off some wood from the inside walls of the resonator with a router to make room for the 1/4″ jack. 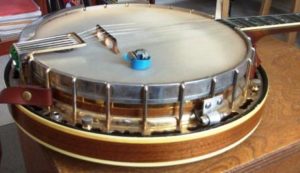 One wall lug for the resonator and several pieces of binding were missing when I received the banjo and the resonator shows some belt buckle wear. 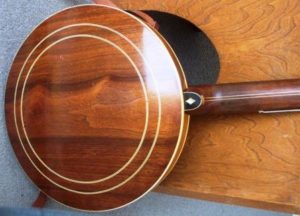 The gold on the Baldwin Style E Prototype has faded except for the tone ring which is still heavily gold-plated. Bobby Thompson used to work in a machine shop, so he could do a lot of the repairs himself. He experimented a lot, and always worked on the optimal setup for his banjo which helped enable him to record a song in one take. He filed down his finger picks, and when they broke he soldered them back together. He used National fingerpicks and a blue Herco thumb pick. The instrument lived in an old Lifton case with pink plush lining and a broken handle. It still sounds and plays great, and it has not changed since Bobby set it up. 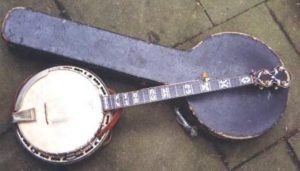 Bobby loved this banjo. He said it sounded evenly all up and down the neck, one feature he wouldn’t find in any other banjo. I don’t dare to drag it out to gigs anymore and only use it for session work and home recording now. And even today Bobby Thompson’s “Hee-Haw Banjo” still gets lots of compliments in the studios.